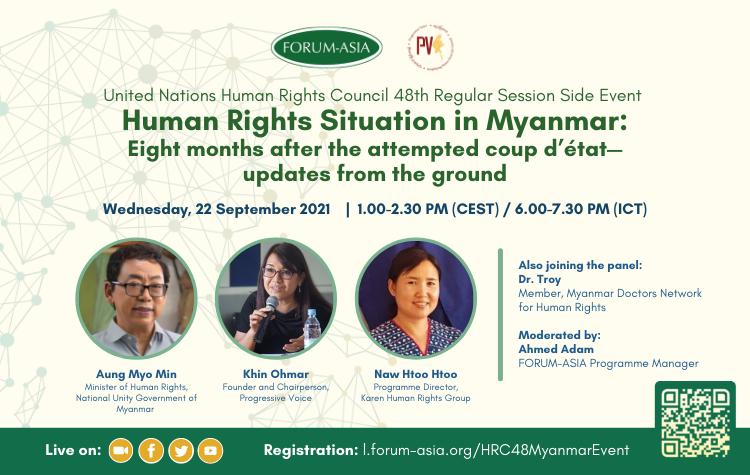 More than eight months on after the Myanmar military initiated a coup d’état, Myanmar people continue to resist the Military’s attempts to seize power in the country.

Civil servants, private sector employees and civilians make up the driving force behind ongoing protests, boycotts, strikes and the coordinated civil disobedience movement. Over 400,000 civil servants have been on strike against the junta since February.

Amid the ongoing popular resistance to the military’s attempts to take control of the control by force, the duly elected members of the parliament in the November 2020 elections ‒ representatives of various ethnic groups and civil society leaders ‒ have established the National Unity Government (NUG) in April 2021. With its cabinet of respective ministries and civilian authorities, the NUG continues to provide essential services in the country, including handling of the COVID-19 pandemic and overseeing the provision of humanitarian aid.

The military has responded to the broad-based and nationwide protests and popular movements with brutalality and violence. Their quest to quell dissent is deepening the ongoing human rights and humanitarian crisis in Myanmar. The military has killed over 1,000 people, including at least 75 children and arrested nearly 8,000 in the 8 months since its attempt at an illegal coup.

The junta had weaponised the COVID-19 pandemic against civilians as a form of collective retribution for their continued defiance. The military’s escalating violence against ethnic communities, in response to opposition to the coup, has displaced over 250,000 people since February.

According to the UN Special Rapporteur on the situation of human rights in Myanmar, the military’s continuing systematic violence designed to create widespread terror in the country ‘could amount to crimes against humanity’.

Join this virtual side-event as we update the Council and the wider international community on the situation in the country from the perspectives of the NUG, Myanmar civil society organisations and people’s resistance to the attempted military coup.

This is a UN side event at HRC48 organised by FORUM-ASIA and Progressive Voice.

Media contact: For more information or to set up an interview with any of the speakers, please contact Melissa Ananthraj, Communication and Media Programme Manager, FORUM-ASIA at communication@forum-asia.org