From Our Member Purple Action for Indigenous Women’s Rights (LILAK), the Philippines – LILAK’s Statement on the FTAA renewal of OceanaGold Philippines Inc. (OGPI)
31 May 2021 2:50 am

May 11, 2021
LILAK’s Statement on the FTAA renewal of OceanaGold Philippines Inc. (OGPI)
OCEANA’s MINING PERMIT RENEWAL – 25 more years of violence and destruction
LILAK (Purple Action for Indigenous Women’s Rights) believes that President Duterte’s impending renewal of the mining agreement of OceanaGold Philippines Inc. (OGPI) for another 25 years presents clear and present danger – not just to the Tuwali people in Brgy. Didipio, Kasibu, Nueva Vizcaya, but to other rural and indigenous communities in the country.
The renewal of OGPI’s Financial and Technical Assistance Agreement (FTAA) assures another 25 years of violence, harassment, destruction of the environment, loss of livelihood, and the deterioration of health which will affect not only the people of Didipio, but the whole province of Nueva Vizcaya. These are the very reasons that for more than 25 years, the Tuwali community has been consistently opposing the Australian-Canadian mining corporation even before it has been granted its FTAA in 1994.
The resumption of OGPI’s destructive mining operations will come at the time of COVID-19 pandemic which the country continues to suffer from. A decision that would allow this mining firm to destroy what little land there is for crops, pollute rivers and sources of water, and release toxins in the air, in a time of a global health and food crisis, could only come from the most sadistic, if not apathetic, of decision-makers.
Myrna Duyan, one of the women leaders of Bileg Dagiti Babbae (Lakas ng Kababaihan) and a close partner of LILAK says, “The renewal of the FTAA means another 25 years of this – of destruction of the environment and biodiversity, and the loss of livelihood for us farmers.” Manang Myrna also sees that the renewal would ensure another 25 years of violence and harassment against the Tuwali indigenous people and the community of Didipio. “Those who stand firm against OGPI will surely be placed in danger,” she added.
Despite this, Manang Myrna said she would remain firm. “We have more than enough evidence; we have more than enough people from different places and backgrounds who witness and report the long-list of OGPI’s human and environment rights violations. Only a handful of those in powerful positions promote mining. We who protect our land, air, and water are many and we will continue to defend our rights.”
LILAK stands with Manang Myrna, Bileg Dagiti Babbae, and the rest of the Didipio community who remain steadfast in their struggle against the destruction of their environment and against the lies and red-tagging thrown at them as they continue to defend their rights against OGPI.
This FTAA renewal and the recent signing of Executive Order 130 which lifts the moratorium on new mineral agreements are being purported by the Duterte administration as part of the country’s economic recovery. However, time and time again, it has been reported by economists that the contribution of the mining industry to the country’s GDP amounts to less than 1%.
On the other hand, the cost on environment and human rights of the mining-affected communities have been enormous. With open-pit mining, forests have been decimated, food sources have been destroyed, and communities have been made more vulnerable to disasters. One of the most recent tragedies is that of the Itogon landslides at the mining site controlled by the Benguet Corporation, the oldest mining company in the country, during Typhoon Ompong in 2018. The landslide buried more than 100 miners and their families. But people are not only killed in mining disasters, they are also killed in their resistance against mining. In 2019, the Philippines has the second highest mining-related killings in the world, according to Global Witness.
It was clear then, but more so now, that Duterte has bigger ears for the corporate evil whisperers than the loud cries of Tuwali women when their peoples’ barricade was demolished by police accompanying OGPI’s tankers; than the loud protests of the B’laan communities opposing the SMI-Xstrata Mining when their indigenous leaders were harassed and threatened. Now more than ever, this government has shown that corporate profit is more important than clean water, productive farm lands, forests, community-based livelihood and life itself of the communities.
LILAK then calls on everyone – to support Bileg Dagiti Babbae and DESAMA (Didipio Earth Savers’ Movement Association), and their call – to end the destruction of Didipio and the whole of Nueva Vizcaya, to heal and rehabilitate the land, and reject the renewal of OGPI’s mining permit. LILAK believes that if the community of Didipio wins this fight, it will be a victory for all other mining-affected/threatened communities, as it is a step towards environmental justice. Together, we have a fighting chance against these corporations, and the extractive, destructive and exploitative development framework of this government.
Realign the government’s focus and efforts towards building sustainable food and water sources for communities and towards strengthening their immunity against COVID-19.
Reject the FTAA renewal of OGPI. Demand for immediate rehabilitation of Didipio.
#DefendDidipio #AyudaHindiMina
______
For more information:
judy a. pasimio
0917-526-8341 | judy104@lilak.net
Shar Balagtas
0977-196-6122 | sharbalagtas.lilak@gmail.com 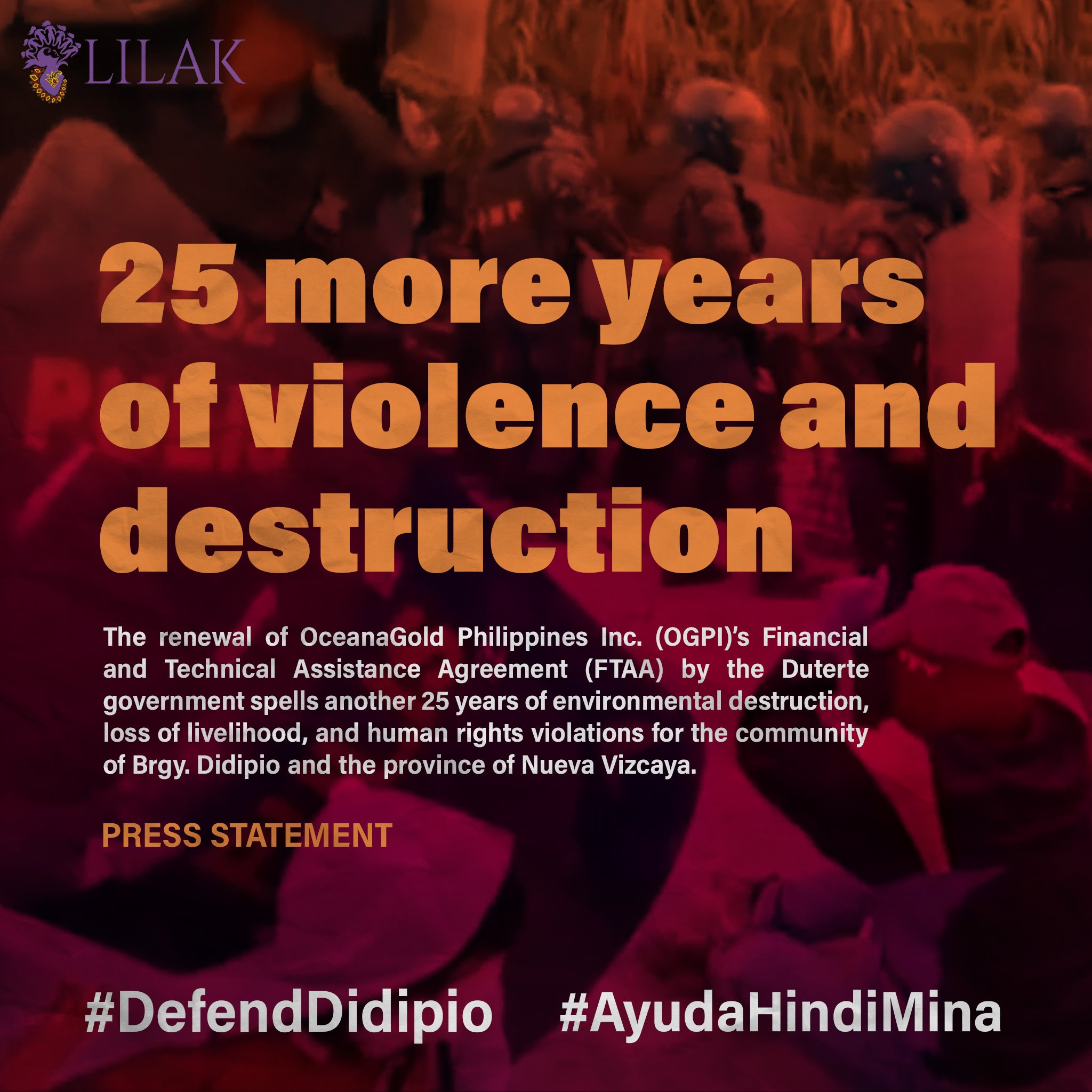