From Our Member Cambodian League for the Promotion and Defense of Human Rights (LICADHO), Cambodia – Statement – Environment Ministry Should Stop Arresting and Harassing Forestry Activists
6 March 2021 12:23 am

February 9, 2021 – We, the undersigned groups, urge the Ministry of Environment to stop their campaign of harassment against local forestry activists and community members. On Friday morning, local officials working for the Ministry of Environment arrested five forestry activists who were wrapping trees in Buddhist cloth and collecting evidence of widespread illegal logging occurring inside Prey Lang Wildlife Sanctuary. 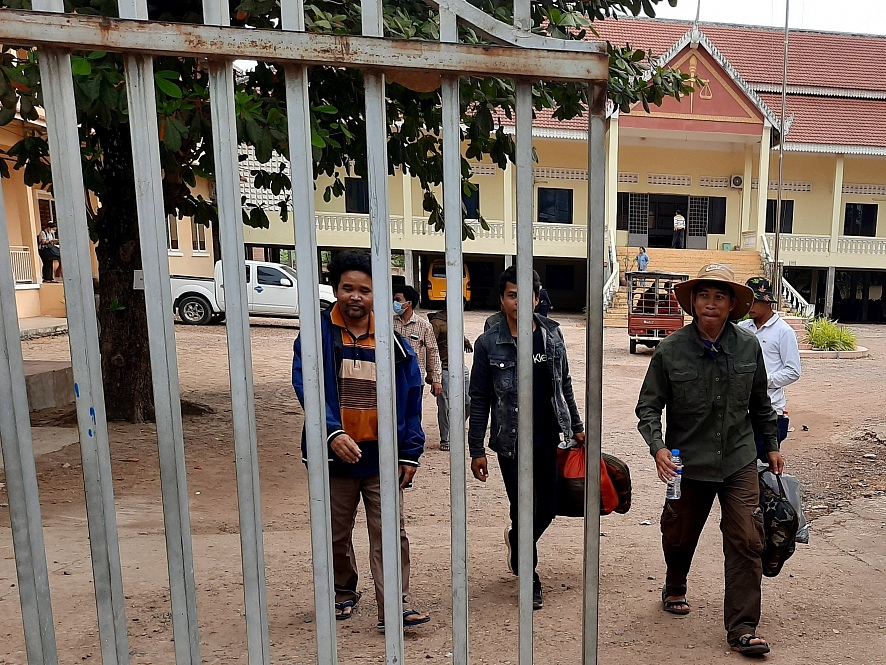 A group of environmental activists are released after being detained for three nights without charge.

The five were detained without charge for three nights in the Kratie provincial police station and environmental department office before being released on Monday morning. The activists were released only after thumb-printing a contract ordering them not to undertake further conservation activities inside the protected area, or to share footage, photos or information with other organisations, without permission from authorities.

This is not the first time some of these activists have been detained. When taken together with the ministry’s previous crackdown on community-based events to protect the Prey Lang forest last year, we have serious concerns that some of the ministry’s actions against grassroots activists are not only failing to protect the country’s remaining forests, but in fact harming conservation efforts, particularly in the Prey Lang Wildlife Sanctuary.

The arrested activists, one of whom was Ouch Leng, a Goldman Environmental Prize winner, were detained on Friday inside the wildlife sanctuary in Kratie province. The items seized from the five by authorities as “evidence” include posters that say “Help protect our forest”, cameras, GPS devices, and memory cards that the activists said contain evidence of illegal logging. 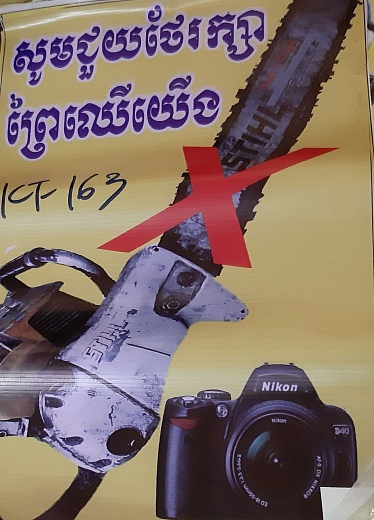 Posters that say “Help protect our forest” were withheld by the court as “evidence”.

These items are clearly not indicative of any crime. In fact, they show that the five environmental activists – Ouch Leng, Heng Sros, Men Mat, Heng Run, and Torng Cheang – were working to protect the increasingly endangered Prey Lang forest and document evidence of criminal logging in the area.

The Ministry of Environment accused the individuals of “entering the protected area without permission”. This accusation has no basis in Cambodian law. A blanket denial of entry into protected areas only exists for specifically designated “core zones”, which Prey Lang does not have. Sadly, this is not the first time the ministry has detained forestry activists for simply being inside this wildlife sanctuary.

In February last year, ministry officials stopped hundreds of monks, community members and environmental activists from the Prey Lang Community Network from entering the forest for an annual tree-blessing ceremony – once again claiming that they were not allowed to enter the protected area. A month later, local officials detained four forestry activists – including Leng and Mat – who were investigating reports of illegal logging in Prey Lang. These arrests occurred after the men were beaten by security guards working for Think Biotech, a company with a 34,000-hectare concession that is contiguous with the Prey Lang Wildlife Sanctuary and has been accused of illegal logging inside the protected area by local community members.

Illegal logging in protected areas is a rampant problem in Cambodia, and we desperately need many different individuals and organisations – including the Ministry of Environment, international and local civil society organisations, and community-based organisations – to work freely and independently in order to protect our remaining forests.

We are disappointed that the ministry has instead engaged in a campaign of harassment against some of the country’s most prominent forestry activists. Taken together, these actions, as well as recently reported plans to construct a power transmission line and accompanying access road through the heart of Prey Lang, deeply concern us.

Prey Lang is a designated “protected area” under Cambodian law. The five arrested activists, like all of us, only want to see the wildlife sanctuary live up to its “protected” designation. We call on the Ministry of Environment to cease their harassment of activists, and respect the rights of all parties who wish to see Prey Lang conserved and protected for many years to come.

For a PDF version of this statement in English, please click here.

For a PDF version of this statement in Khmer, please click here.

For an audio version of this statement in Khmer, please click here.