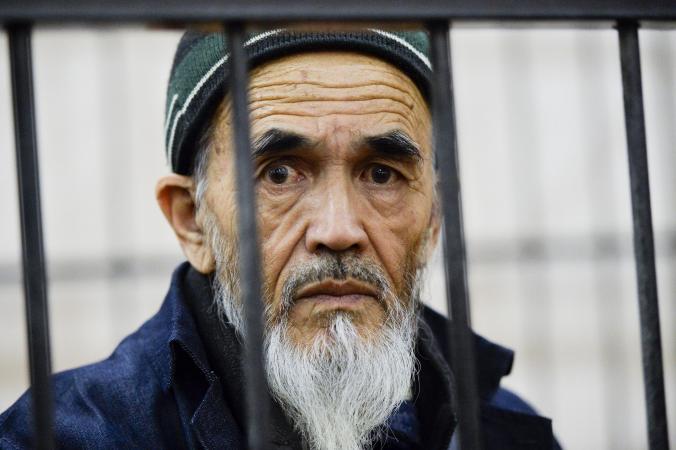 Ethnic Uzbek journalist Azimzhan Askarov, who was arbitrarily arrested, tortured, convicted after an unfair trial and jailed for life looks through metal bars during hearings at the Bishkek regional court, Kyrgyzstan, Tuesday, Oct. 11, 2016.

(Berlin) – Kyrgyzstan authorities should release the ailing human rights defender Azimjon Askarov and quash his conviction after an unfair trial, Human Rights Watch said today. The country’s Supreme Court will hear an appeal of his case on February 25, 2020.

The 68-year-old Askarov, who was wrongfully convicted and sentenced to life in prison for his alleged role in the inter-ethnic violence that rocked southern Kyrgyzstan in June 2010, suffers from deteriorating health and inadequate medical attention in prison. The Supreme Court hearing may be Askarov’s final opportunity to appeal his case, his lawyers say. The Kyrgyz government should accept a 2016 United Nations (UN) Human Rights Committee finding that called for Askarov’s release and quash his case.

“Azimjon Askarov’s imprisonment is a serious stain on Kyrgyzstan’s human rights record,” said Hugh Williamson, Europe and Central Asia director at Human Rights Watch. “He should be released immediately, given access to needed medical care, and be allowed to reunite with his family after 10 years unjustly spent behind bars.”

The inter-ethnic violence of June 2010, which disproportionately affected ethnic Uzbeks, left hundreds of people dead and destroyed thousands of homes. These events were followed by numerous cases of arbitrary detention, ill-treatment, and torture, among them for Askarov. He was found guilty in September 2010 of participating in mass disturbances, inciting ethnic hatred, and abetting the murder of a police officer killed during the unrest.

Askarov’s detention and trial were marred by serious human rights violations, including credible allegations of torture. In 2016, the UN Human Rights Committee found that Askarov was arbitrarily detained, held in inhumane conditions, tortured, and mistreated. These and restrictive conditions around the trial created “a general sense of fear, incompatible with the proper execution of the defense lawyer’s functions.” The committee urged Kyrgyzstan to immediately release Askarov and quash his conviction.

In March 2019, Askarov was transferred to Prison Colony No. 19 in the Chuy region. Askarov’s lawyers reported that their client’s health had significantly deteriorated over the previous year. They said that he had a dry cough, was unable to catch his breath, and that certain aspects of prison life, such as being required to stand for long periods of time during cell checks, had a further negative impact on his health.

In addition, news outlets reported that Askarov said he had been placed in solitary confinement and denied family visits as punishment for protesting restrictions on family visits to the colony.

Before his detention, Askarov had been the director of Air, a human rights organization in southern Kyrgyzstan focused on documenting prison conditions and police treatment of detainees. Askarov also documented violence and looting in the town of Bazar-Korgon during the June 2010 violence.

“The Kyrgyz government should act urgently to release Askarov and quash his conviction, particularly in light of his deteriorating health and inadequate prison conditions,” Williamson said. “Nearly a decade after his wrongful arrest, the Kyrgyz authorities are long overdue in delivering justice for Askarov and his loved ones.”