From Our Member People’s Solidarity for Participatory Democracy (PSPD), South Korea – Press Conference: No War on IRAN
10 January 2020 11:07 am 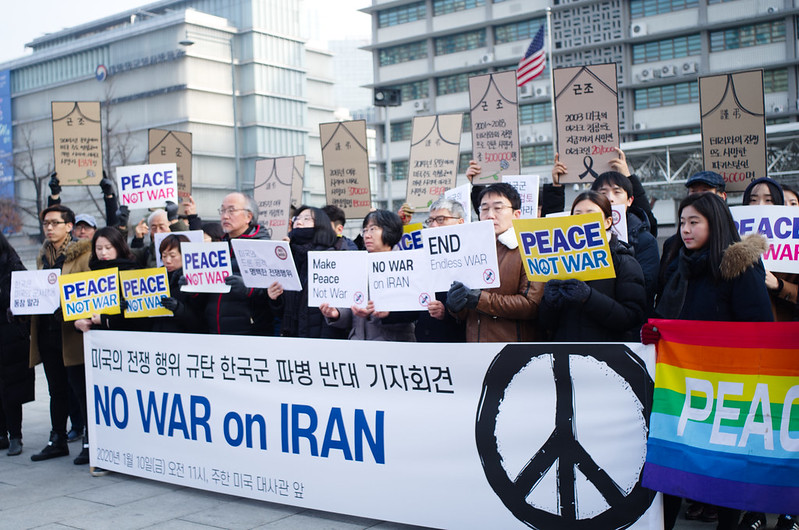 No War on IRAN!

The press conference for the Korean NGO that denounces U.S.’act of war’ and opposes Korean troop dispatch

The Trump administration has committed an utterly unpardonable act of war. Last January 3rd (local time) they assassinated Qasem Soleimani, the Iranian Major General of the Islamic Revolutionary Guard Corps, through a drone strike at Bagdad Airport. In response, Iran declared a ‘harsh retaliation’ on the 8th(local time) and carried out an attack against the U.S. by launching a dozen or so missiles at two U.S. army bases in Iraq. Later, the Foreign Minister of Iran said that they did not seek further military escalation or war. Likewise, President Trump announced that he did not want to use more military force, which fortunately stopped the situation from getting out of control.

The assassination of General Soleimani is a clear violation of international law and an act of war that infringes upon Iraq’s sovereignty. The U.S. government argues that Commander Soleimani plotted an attack against U.S. facilities in Iraq, Lebanon, and Syria. However, the U.S. government failed to provide specific evidence concerning this and the Iraq government has also fully denied such claims. This is the reason why such criticisms against the violation of the UN charter, that attacking another country is prohibited unless one’s own country is attacked or unless it is approved by the UN Security Council, have arisen. Furthermore, it is unjustifiable for a third power to proceed with a military operation of murdering an independent nation’s high-ranking official without notifying the Iraq government. The foreign ministry of Iraq also confirms that it has sent a letter to the UN Security Council criticizing that “the U.S. attack severely violates Iraq’s sovereignty and the terms for U.S. military occupation in Iraq.”

We stress that the U.S. is clearly responsible for this incident. Moreover, it should be remembered that the conflict between the U.S. and Iran was caused by the U.S. unilaterally breaching the Joint Comprehensive Plan of Action. Despite international organizations such as the IAEA and EU verifying on several occasions Iran’s fulfillment of the nuclear agreement, President Trump had called into question the nuclear deal when he was the presidential candidate. Eventually President Trump one-sidedly withdrew from the agreement and brought back sanctions against Iran. Disregarding the nuclear deal that set the foundations for overcoming the hostile U.S.–Iran relation and which was also supported by the UN Security Council cannot be justified by any words. The U.S. should not try to enforce new sanctions but acknowledge its responsibility and try to restore the nuclear agreement with Iran.

War cannot be a solution. Military action cannot solve conflicts or problems. The world has not forgotten the long ‘war against terrorism’ that started in 2001 with the Afghanistan war, passed through the 2003 Iraq war, and continued into the emergence of the ISIS. The people who have suffered the horrendous outcomes of war clearly remember: there are no winners in war. Through the cycles of violence, military industries have made billions and politicians sought political gain. Countless innocent civilians have died, gotten injured, or become refugees. The people of the world plea that the same mistakes not be made. There should be no more military action of any sort between the U.S. and Iran.

Meanwhile, last January 7th, the United States Ambassador to Korea Harry Harris openly pressured the Korean Government by asking Korea to send troops to the middle east, which is highly inappropriate. Korea has been examining several ways to respond to the U.S. request to send troops to Hormuz. Korea has considered sending a liaison officer to the Hormuz escort coalition headquarters or expanding the activity zone for the Cheonghae Unit. The Korean government should immediately stop such considerations and decline the U.S. request for military support. Korea has no justification to take part in U.S. military action when the U.S. has started such conflict through warfare. No matter how much the Korean Government argues that the dispatch is for protection of its citizens, other countries in the world including Iran will not think the same and Korean troops will ultimately have to face Iran. Moreover, it is not right for Korea to engage in military strife in other regions when it asks the international society to take part in making peace in the Korean Peninsula.

This is a time, more than any other, that requires a voice of peace. We are in solidarity with other global citizens that want peace and together will oppose war.

We strongly condemn the United States ‘act of war’.
The U.S. and Iran should not attempt any further military action.
The Korean government should refuse U.S. request to send Korean troops to Hormuz.

For a PDF version of this press release, click here