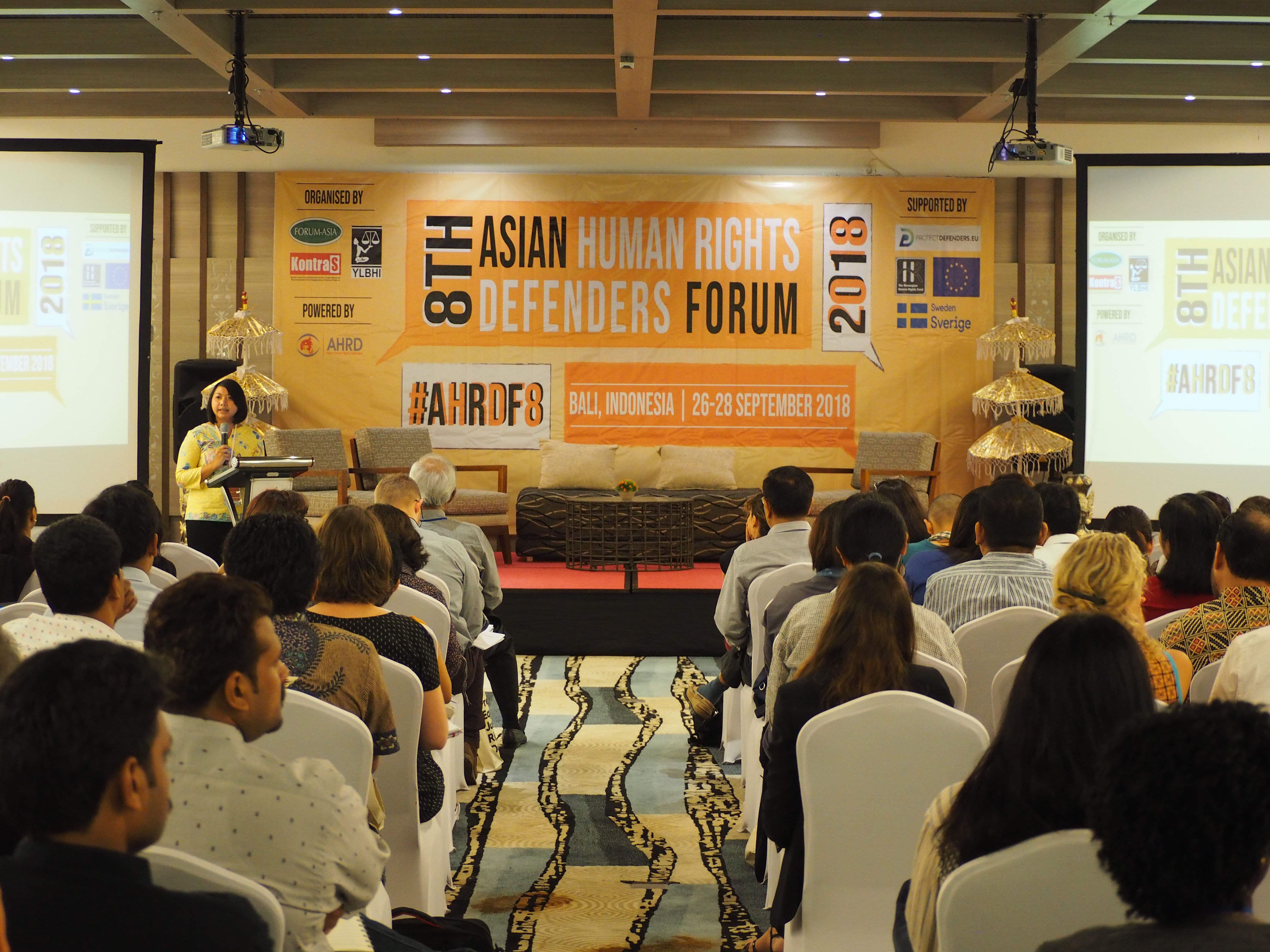 We, 152 human rights defenders (HRDs)[1] from 26 countries across Asia and beyond, participating in the 8th Asian Regional Human Rights Defenders Forum held in Bali, Indonesia from 26-28 September 2018, adopt this declaration:

Asserting our identity as HRDs, and our indispensable role in the consolidation and promotion of democracy as well as in protection of such vital resources as land and environment based on the foundation of the rule of law and internationally recognised human rights standards;

Standing in solidarity with all HRDs at risk and their family members, as well as the HRDs who have lost their lives in asserting their own as well as others’ human rights;

Reaffirming our commitment to work for the realisation of the human rights for all peoples and to attain justice for all those that have had their human rights violated;

Recognising the contribution of the mandate of the UN Special Rapporteur on the situation of HRDs, other UN Special Procedure Mandate Holders, and other national, regional and international movements and processes in legitimising and protecting the work of HRDs;

Appreciating recommendations from reports of previous UN Special Rapporteur on the situation of HRDs as well as resolutions and commitments made at previous Asian Regional Human Rights Defenders Forums;

Expressing concern that HRDs in Asia continue to face threats and challenges, including, but not limited to: killings; enforced disappearances; torture and degrading treatment; arbitrary arrests and detention; gender, sexual and other identity-based violence; surveillance; administrative, judicial harassment and criminalisation; forced-displacement; travel bans and other forms of restriction of movement; cancellation of registration licenses; funding restrictions; smear campaigns and the labeling of HRDs as traitors, foreign agents, terrorists or enemies of states; online, psychosocial and other kinds of harassment; and that the civic space for HRDs to safely operate is increasingly and actively shrinking and, in some contexts, being closed;

Alarmed at the increasing trend of the enforcement of repressive laws and acts aimed at delegitimising, restricting, and attacking the work of HRDs, non-governmental and community organisations, as well as media workers;

Noting that, despite some positive developments in some Asian countries, Governments, judiciaries, National Human Rights Institutions and other state institutions in many other countries are still failing to protect HRDs by denying or delaying interventions due to a lack of mandate, power and political will; or due to harassments against them for defending human rights;

Concerned about increasing human rights violations against HRDs – the nature of these violations being gross and extreme – perpetrated by non-state actors including, but not limited to, businesses entities and extremist groups;

Worried about the pervasive culture of impunity within state and non-state agencies, and the resultant lack of accountability in the way these agencies respond to the work of HRDs;

Extremely troubled by the lack of political will by states to set up effective protection mechanisms for HRDs and their family members, as well as other monitoring mechanisms to ensure states’ compliance to international human rights obligations;

Committed to the establishment and strengthening of local, national, and regional level network of HRDs to consolidate and enhance protection measures as well as advocacy efforts by HRDs;

We call on Governments to:

We call on all National Human Rights Institutions (NHRI) in Asia to:

We call on Parliaments in Asia to:

We call on national and transnational corporations to:

We call on donors and International Financial Institutions to:

We call on members of the Association of Southeast Asian Nations (ASEAN) to:

We demand HRDs, CSOs and social movements in Asia to:

[1] According to the United Nations Office of the High Commissioner for Human Rights: ‘(…) human rights defenders can be any person or group of persons working to promote human rights, ranging from intergovernmental organizations based in the world’s largest cities to individuals working within their local communities. Defenders can be of any gender, of varying ages, from any part of the world and from all sorts of professional or other backgrounds. In particular, it is important to note that human rights defenders are not only found within NGOs and intergovernmental organizations but might also, in some instances, be government officials, civil servants or members of the private sector.’ ‘(…) common to most defenders are a commitment to helping others, a commitment to international human rights standards, a belief in equality and in non-discrimination, determination and, in many instances, tremendous courage.’ Special attention should be given to vulnerable groups of defenders such as WHRDs, LGBTI defenders, land and environmental rights defenders as well as minority rights defenders.

For a PDF version of this Declaration, click here