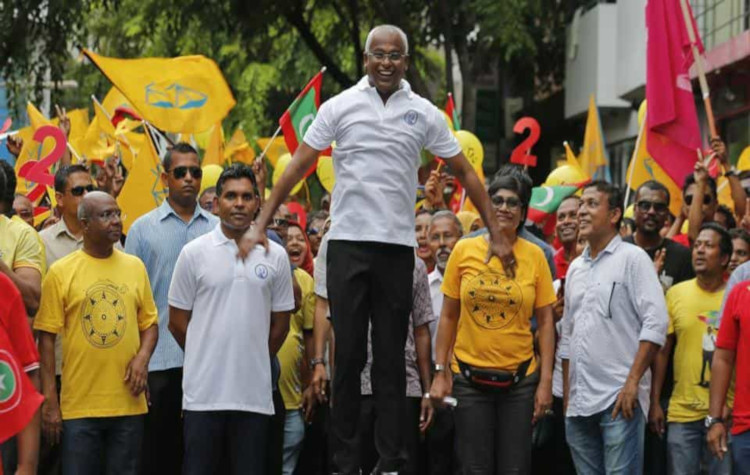 (Bangkok/Kathmandu, 21 November 2018) – On 17 November 2018, Ibrahim Mohamed Solih was sworn in as the new President of the Maldives, he had already formed a new Government after the General Elections of September 2018.[1] The Asian Forum for Human Rights and Development (FORUM-ASIA) welcomes the first steps new Government has taken in support of human rights in the country, and urges for further measures to ensure fundamental freedoms and strengthen the rule of law to follow.

Since the adoption of the new Constitution and the first multi-party elections in 2008, the Maldives has continued to experience a turbulent political climate. Repression of dissent and undue restrictions on political opponents, human rights defenders, journalists and media were the result of protracted authoritarian rule. Despite constitutional guarantees and international human rights obligations, the rights to free expression and peaceful assembly remained severely restricted. Human rights defenders, journalists, civil society groups and political activists were constantly threatened, and harassed by state security forces, as well as radical groups with discreet sanction from the Government.

A number of legislations, enacted before and after the 2008 Constitution, criminalised lawful expression in both offline and online media. FORUM-ASIA therefore welcomes the repealing of the Anti-Defamation and Freedom of Expression Act on 14 November by the joint opposition led by President-Elect Solih. The law had criminalised defamation and had been widely used to target human rights defenders, dissidents, journalists, and opposition aligned media.

However, there are a number of other legislations which continue to undermine rule of law, democracy and human rights. The Anti-Terrorism Act 2015 contains such a broad definition of terrorist activities that it allows the authorities to interpret legitimate peaceful political activities as terrorism. Offences under the Act carry penalties of up to 25 years in jail. The Religious Unity Act has been used to persecute and intimidate human rights defenders and dissidents. The Associations Act 2003 requires all organisations to register with the Government, and has made granting registration discretionary. The previous Government has by regulation and in contravention of the Article 16 of the Constitution lifted the long held moratorium on the death penalty in the Maldives.

It is also notable that the first 100 days agenda of the Solih administration includes: revising laws intended to harm specific persons or groups; submitting a Child Rights Protection Bill to Parliament; expediting cases to UN Working Group Enforced involuntary Disappearances and the UN Human Rights Council; and starting to restore justice for all victims of murders, abductions, killings, forced exile or property infringement.

The new Government must oblige these proposed commitments to bolster democratic values and norms. FORUM-ASIA calls on the new Government to urgently repeal repressive and restricting legislations that undermine democracy and human rights in accordance with international standards.

FORUM-ASIA welcomes the initiative undertaken by President Solih of forming an inquiry commission to conduct investigations into cases of murders and disappearances between 1 January 2012 and 17 November 2018. As a first step, the new commission must ensure credible and transparent investigations into the murder of human rights defender Yameen Rasheed, and the disappearance of human rights defender Ahmed Rilwan Abdulla, and to address the serious lapses in the investigation and prosecution cited by the Criminal Court’s verdict. FORUM-ASIA urges the Government of the Maldives to maintain free, independent and transparent investigations in these matters, and ensure justice for the victims and their families.

FORUM-ASIA further calls on the Government to take immediate measures to ensure a safe and enabling environment for human rights defenders, civil society, journalists and dissidents, in particular by ending impunity for attacks against them.

The outcome of the elections demonstrates people’s belief in democracy, freedom and human rights as opposed to authoritarianism and corruption. This places an important responsibility on the new Government to urgently remove all restrictions on fundamental freedoms and restore the rule of law as well as independence of the judiciary and other state institutions. In this regard, FORUM-ASIA urges the new Government to cooperate closely with civil society and UN Human Rights Mechanisms.