‘Most people do not like to be made feel like they are stupid when they are in the public eye’- An Interview with Naranjargal Khashkhuu, President and CEO of Globe International Center, Mongolia
9 May 2018 3:07 pm

For this month’s e-newsletter, FORUM-ASIA talked to Naranjargal Khashkhuu, President and CEO of Globe International Center (GIC), Mongolia, a member of FORUM-ASIA. She has a long history of working on independent and democratic media, including: election coverage; public service broadcasting; television journalism; journalism and society; human rights; gender reporting; and the right to information.

In this interview, we asked her about her background, her motivation, inspiring moments and challenges. To learn more about her life and work in Mongolia. 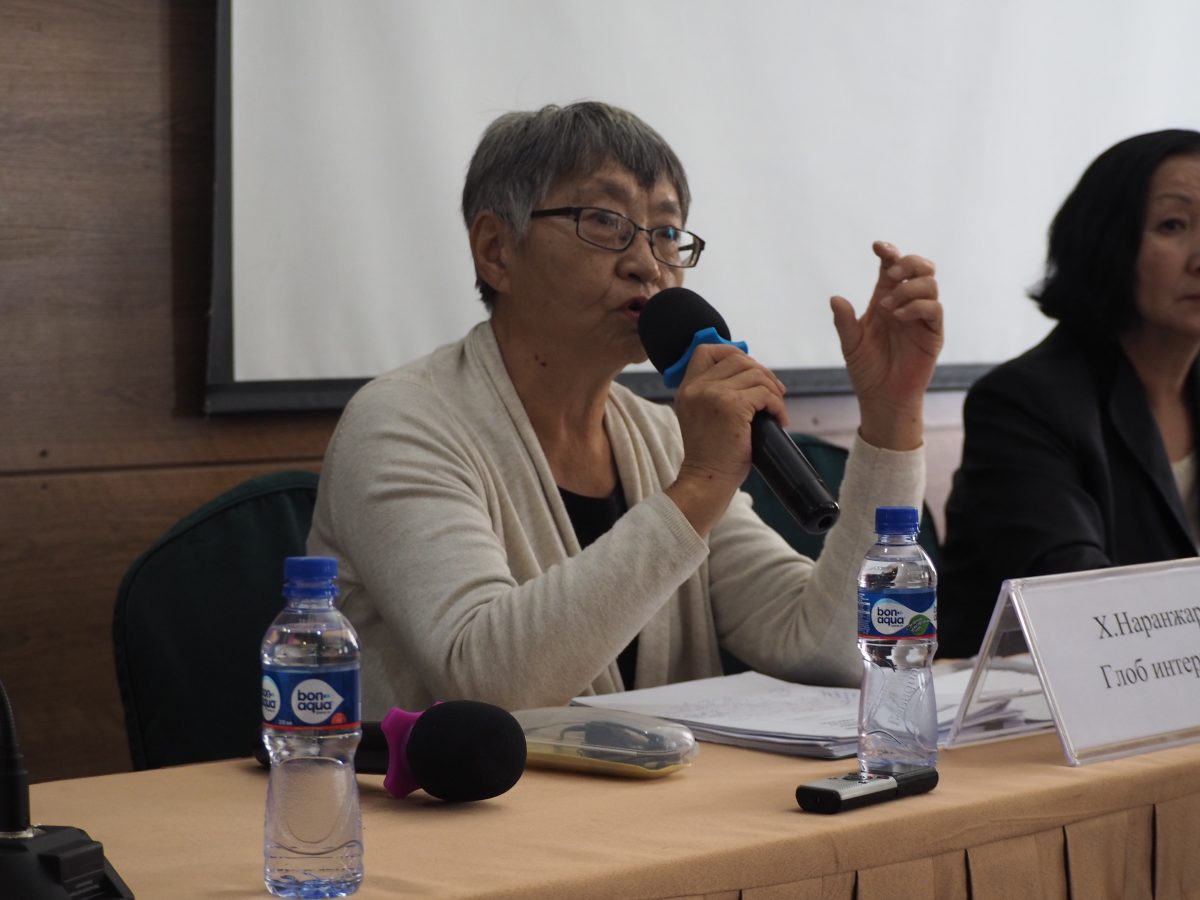 Back in 1989, when the democratic changes started in Mongolia influenced by the Perestroika in the former Soviet Union, I worked as Chief-in-Editor of the Arts and Culture Programme Department of Mongolian TV, which was the only TV station in the country at the time and a government-run station. I became a member of the People’s Revolutionary Party (MPRP) of Mongolia because I wanted to do a PhD in journalism at the High School of the Communist Party of the Soviet Union and I needed to be a member of the party to be able to do that.

The country was undergoing social change, and debates on one multi-party system were starting. The MPRP’s daily newspaper, Unen, published a translation of the UN Human Rights Declaration and theInternational Covenant on Civil and Political Rights (ICCPR). Mongolia had joined the UN in 1961 and became a State Party of the ICCPR in 1974, but we had never been aware of these documents. Human rights issues, particularly media freedom and the liberalisation of the government broadcaster were hot topics in the Mongolian press and among the media community at large.

In 1991, a new General Director of Mongolian Radio and TV, Mr. Kh.Tsevlee, a famous journalist gave me a chance to study English in London, when the British Embassy offered a British Council fellowship. I had an opportunity to practice on the BBC for two weeks after my English course.

I cancelled my MPRP membership, and gave back my party ID card. After having been to a ‘capitalist’ country,I became aware that we were totally brain-washed by party propaganda. Upon my return, I was appointed as ProgrammeDirector of Mongolian TV.

Around that time, I met Mr. Ts.Dashdondov, a famous journalist, who was well-known for his publications criticising the communist system, raising awareness about democracy and human rights,and his active engagement with media reform. He was waiting in our office to meet the Director. I invited him to my office, and we started talking. I was inspired by his ideas about establishing an alternative journalists’ organisation. Soon thereafter, I was elected Vice President of the Free and Democratic Journalists’ Association of Mongolia, which became a member of the International Federation of Journalists (IFJ). I functioned as an Executive Committee member of the IFJ from 1998 to 2007.

In 1999, GIC was funded by five persons. Mr. Tsevlee and Iwere among the founders. It soon grew to become a very popular non-governmental organisation.

In 2002, Urantsooj Gombosuren attended one of our workshops for civil society organisations on how to run media campaign. I was astonished by her commitment. She was a strong advocate for FORUM-ASIA. She and one of the FORUM-ASIA staff visited our office in 2003 and it was from there our cooperation with FORUM-ASIA started.

When I was in London, I became confident that the BBC module was one that Mongolia should also adopt. I was aware that my position as Programme Director allowed me to lead such a process and I started working on a process to convert the Government Broadcaster into a public service provider, engaging eight other staff members.

When the group presented the proposal to the rest of the staff, it was supported. However, I faced protest from a TV Director, who had replaced the previous one, who had appointed me. He wanted to release me from the position, while the new General Director of the Mongolian Radio and TV, Mr. B.Uvgunkhuu, as well as the majority of the staff supported me. The TV Director insisted though and he even stopped coming to the General Director’s Management meetings.

The situation continued for more than half a year, and it became impossible to work, because the TV Director started undermining my decisions, including a decision to submit a documentary for an Asia-Pacific Broadcasting Union contest. More so, he made a statement that he would fire all workers who cooperated on my proposals for change.

While I was struggling, I became aware that without outside pressure no changes would ever be possible. The Mongolian Journalists’ Union offered me to come in for an interview for a job to work on a Danish International Development Agency project, Free and Independent Press in Mongolia. So I took the decision to be a part of this big media project. I saw this as an opportunity to significantly move media freedom further. In 1999, the project ended and I started running GIC. Advocating for a public broadcasting services law became one of our priorities.

The Mongolian Parliament enacted a Law on Public Radio and TV in 2005. I was so proud. Even though some people blamed me that I had wanted to take the TV Director position from the beginning.

When the first NGO Forum gathered to nominate the first members for the governing body, the National Council, I refused the nomination. I said I did not lobby for the public broadcasting services law out of my own interest. I lobbied for it for the people of Mongolia, using my experiences and knowledge on TV broadcasting.

The main challenge in our country is ignorance about human rights organisations, and suspicions and blame that they only serve the interests of Western countries. Mongolia is a country with its specifics, so individual meetings with politicians and decision makers are more efficient.

I experienced almost all emotions in my work. Ranging from feelings of betrayal by those who you believed, unfair accusations, frustration when people’s real human nature takes over once they get into power, to many others.

Personally, I do not experience many serious obstacles, except for maybe time, which is always limited when it comes to individual meetings with decision makers. In Mongolia, a lot of young newcomers in Parliament and the Government, are not well aware of democracy and human rights and we need to educate them. Our approach is to focus more constructive engagement rather than naming and shaming. Most people do not like to be made feel like they are stupid when they are in the public eye. But maybe that is also a Mongolian particularity.

Work for the people, for their happiness, and love them! Do not work for your own interests. In Mongolia, some non-governmental organisations work for their own interests to become popular among the public, to make a political career, for example.

And please, do not polarise, while you put your human rights issues on the political agenda. Be patient and passionate!