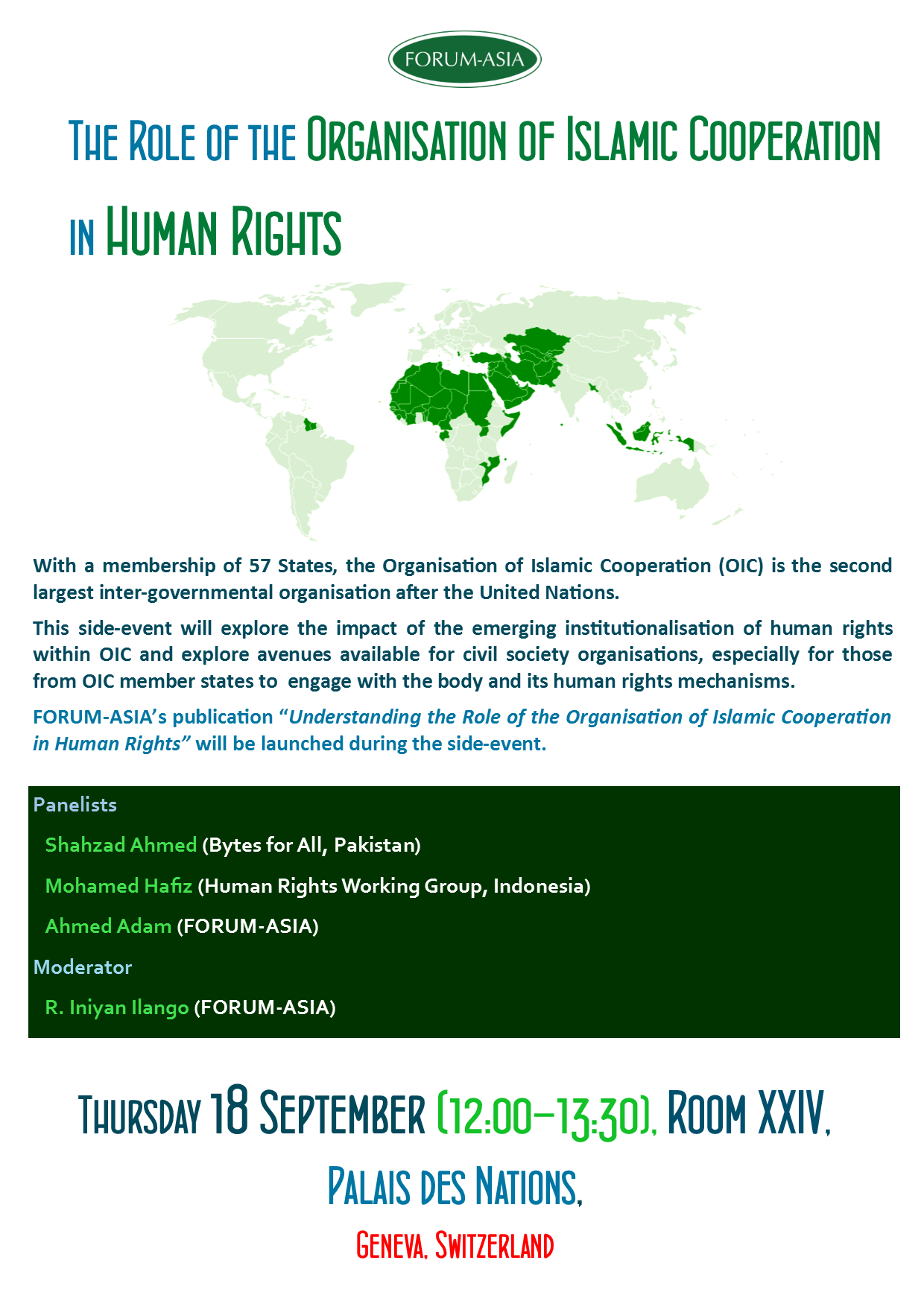 The Role of the Organisation of Islamic Cooperation in Human Rights

The Organisation of Islamic Cooperation’s (OIC) new Charter of 2008 and the establishment of an Independent Permanent Human Rights Commission (IPHRC) have been seen as expressions of the body’s desire to enhance its relevance and legitimacy among the peoples of member States and promote its credibility at the international level.[1]  In a global geopolitical framework where Southern countries and South based groupings are increasingly attempting to play greater roles, OIC’s entry into the human rights arena in a big way may have a significant impact on global human rights discourse as well as issues that concern the global South. In fact at UN human rights forums, as the second largest intergovenmental organistion, OIC holds considerable sway in global dynamics related to human rights. The move towards an increasingly institutional role for human rights within OIC, has come side by side with an increase in internal debate about human rights situations in member countries, such as Syria and Libya, marking a significant shift from its earlier focus on human rights in Palestine and of Muslim minorities in non-OIC member States.

This side-event aims to explore the impact of the emerging institutionalisation of human rights within OIC and explore avenues available for civil society organisations, especially for those from OIC member states to engage with the body and its human rights mechanisms.

FORUM-ASIA’s publication: ‘Understanding the Role of the Organisation of Islamic Cooperation in Human Rights’ will be launched at the side event.  The publication is the first in a series entitled “FORUM-ASIA Working Paper Series: Asian Perspectives on International Human Rights Landscapes”

Key issues to be discussed at the event include include:

The Organisation of the Islamic Cooperation (OIC)[1] is the second largest inter-governmental organisation after the United Nations, with a membership of 57[2] States (including Palestinian Territories). All of these 57 States are from the global South and include several countries that are emerging today as influential players in the world stage. 26 out of 57 OIC Member States belong to Asian region.

OIC has taken a number of steps towards incorporating international human rights norms since it  embarked on a reform programme that began in 2005 and culminated in 2008 with the adoption of a revised Charter which replaced the Charter of 1972. The new Charter expresses the OIC’s determination to “promote human rights and fundamental freedoms, good governance, rule of law, democracy and accountability”, and “safeguard and promote the rights of women and their participation in all spheres of life” in member States in accordance with domestic legislation. In one of the most significant developments pertinent to human rights, the new Charter paved the way for the establishment of the OIC’s Independent Permanent Human Rights Commission (IPHRC) as one of the primary organs of the OIC, mandated to “promote the civil, political, social and economic rights enshrined in the organisation’s covenants and declarations and in universally agreed human rights instruments, in conformity with Islamic values.”[3]

The 18-member Commission is headquartered in Jeddah, Saudi Arabia and is required to meet bi-annually Since its inception it has met five times. Between the first meeting held in Jakarta, Indonesia in February 2012 and fifth meeting held in June 2014 in Jeddah, Saudi Arabia, IPHRC has adopted its Rules of Procedure (RoP) and finalised the standing agenda. IPHRC RoP is a relatively progressive document that apppears to adopt a somewhat expansive interpretation of the IPHRC Statute to allow IPHRC to space and flexibility in interpreting its mandate to independently promote human rights and to expand IPHRC activities to include protection and promotion of human rights, as opposed to the advisory role given to it in the Statute. Permanent items on the standing agenda are civil, political, economic, social and cultural rights in OIC Member States; human rights situation in Palestinian and other Arab territories; and human rights issues on the OIC agenda. However, in keeping with OIC tradition, IPHRC’s RoP and agenda are conspicuously silent on the protection and promotion of human rights of Muslim and non-Muslim minorities in OIC member states.

[2]      Formerly the Organisation of the Islamic Conference

[4]            Statement by H.E. Prof. Ekmeleddin Ihsanoglu, Secretary-General of the Organisation of Islamic Cooperation at the High Level Segment of the 22ndSession of the UN Human Rights Council (28 February 2013) <https://extranet.ohchr.org/sites/hrc/HRCSessions/RegularSessions/22ndSession/OralStatements/Islamic%20Cooperation.pdf> accessed 1 March 2013 [log in required]