Given the common human rights challenges faced by all South Asian States, there is an urging need for a South Asian Human Rights Mechanism. The Regional Initiative is a platform of concerned citizens and civil society advocating for the establishment of such a mechanism in the region.

The Regional Initiative in collaboration with the Asian Forum for Human Rights and Development (FORUM-ASIA), HRCP and Bytes for All will be organising a National Workshop on Building Consensus for a South Asia Human Rights Mechanism in Lahore on 9-10 June 2014.

The national workshop will explore challenges faced by the region, models of other regional mechanisms and avenues for engagement. With the participation of several civil society organisations, experts, lawyers and other key stakeholders, this meeting could prove to be crucial for building consensus among national groups and shape the way forward for the Regional Initiative.

The Regional Initiative for South Asian Human Rights Mechanism is a civil society forum that was created subsequent to the sub-regional consultations held in Kathmandu in 2010 and 2011. This forum is a collaborative platform of civil society and individuals from the region committed to the cause of furthering human rights and peace. The mission of the forum is to advocate for, and help create an environment conducive for the establishment of a South Asia Human Rights Mechanism

With the Asian Forum for Human Rights and Development (FORUM-ASIA), a regional human rights organisation as its secretariat, the Regional Initiative has been striving for greater cooperation and support for the establishment of a South Asia Human Rights Mechanism.

Established in 1985, the South Asian Association for Regional Cooperation (SAARC) sought to promote peace and stability in the region through strict adherence to the principles laid out in the Charter of the United Nations and the Non-Aligned Movement.

Given that the UN Charter has been the basis for evolution of several instruments on human rights, SAARC has also taken some important steps in the right direction.

Key instruments and initiatives of SAARC include:

The SAARC Social Charter, has particularly reiterated the need for States in the region to promote universal respect for and observance and protection of human rights and fundamental freedoms for all. South Asian States have also explicitly reaffirmed their commitment to human rights in the outcome documents of the annual SAARC Summits, including the latest Addu Declaration, 2011.

While Europe, Americas, Africa, Southeast Asia and the Arab States have successfully established regional mechanisms, South Asia lags behind. Recognising the need and importance of regional mechanisms for the realisation of human rights, the United Nations General Assembly and the Vienna Declaration and Programme of Action have specifically called for their establishment. 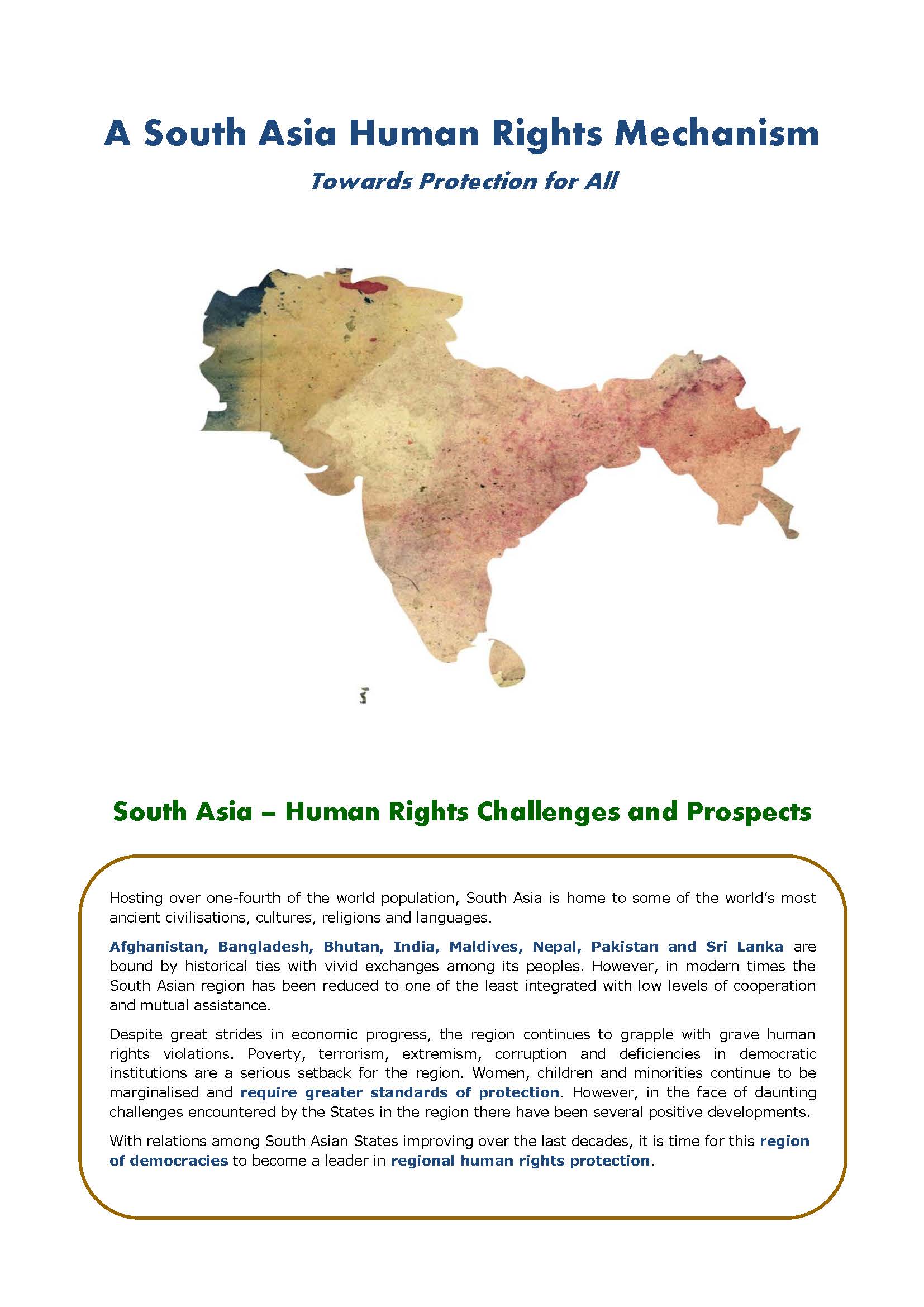