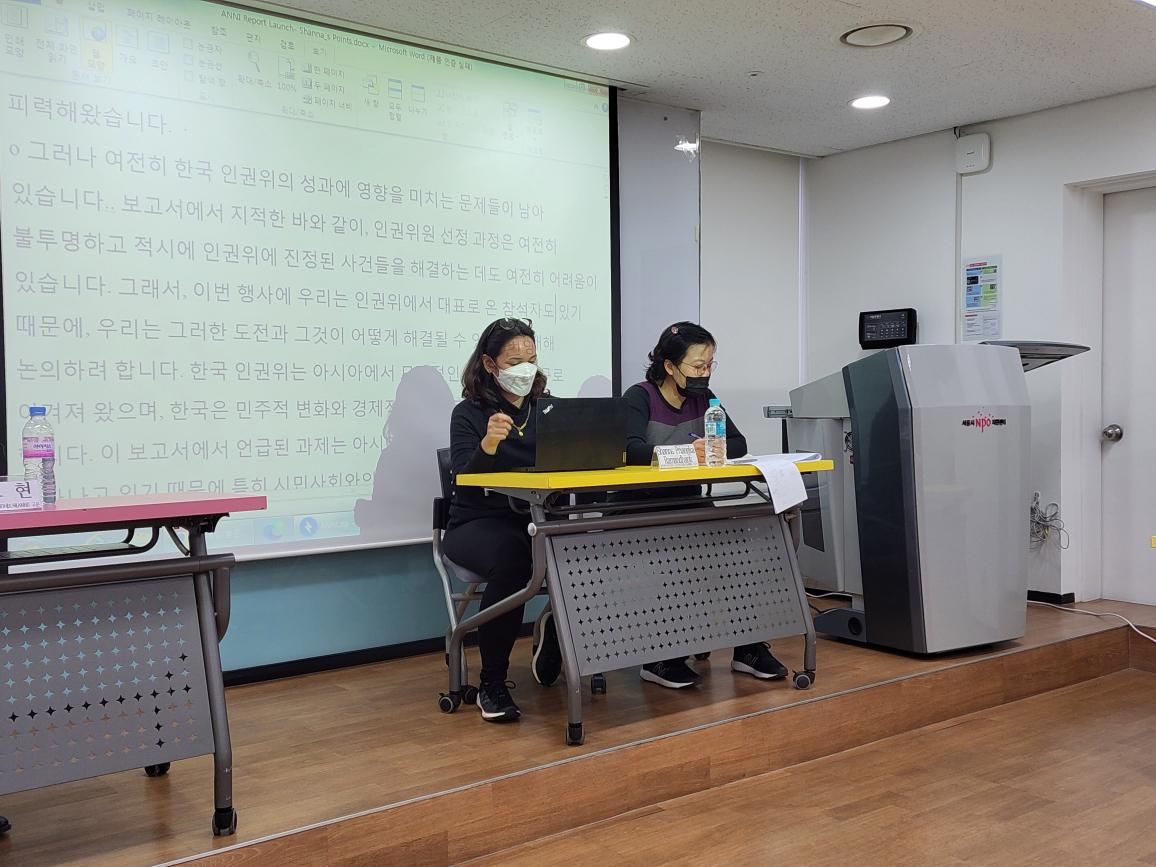 On 16 November 2022, the Asian NGO Network on National Human Rights Institutions (ANNI), together with the Korean House for International Solidarity, launched the South Korean chapter of the  ANNI Report 2020 on the Performance of National Human Rights Institutions (NHRIs) in Seoul, South Korea. A panel discussion took place during the launch with representatives of ANNI, KHIS, the South Korean Non-Governmental Organizations Task Force to Monitor Government Human Rights Policy (“HR Policy TF”), and NHRCK. The panel discussion was also moderated by Prof Nohyun Kwak, former Secretary-General for NHRCK and currently one of the advisers of ANNI. 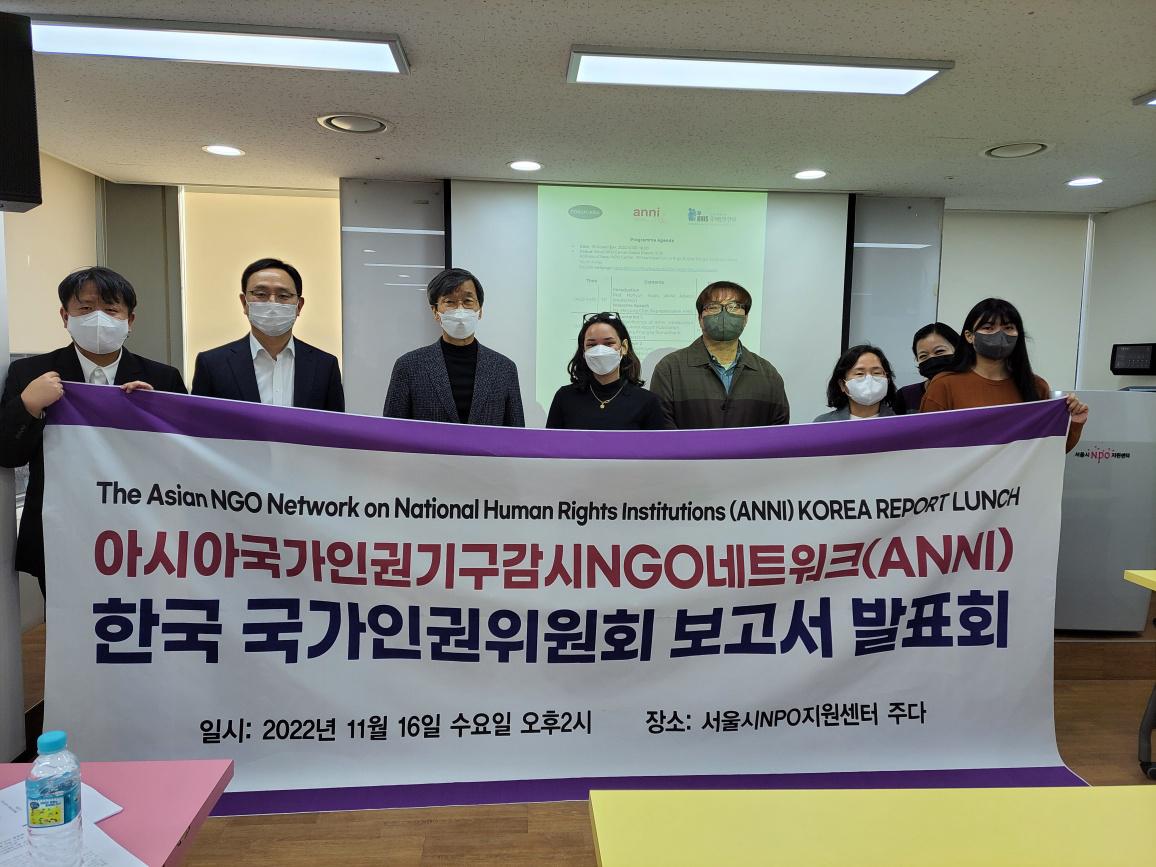 The launch and discussion of the South Korean chapter came at a crucial time for both NHRCK and civil society organizations. The NHRCK received an “A” status from the Sub-Committee on Accreditation of the Global Alliance of National Human Rights Institutions (“GANHRI-SCA”) in 2021 and was elected as the Chairperson of the Asia Pacific Forum of National Human Rights Institutions (APF) in September 2022. However, there remain issues regarding the functioning and performance of the Commission. Critical observations on NHRCK are documented in the ANNI Report and by the GANHRI-SCA, especially on the selection and appointment of Commissioners and the independence from the Government.

Speakers critically engaged on the issue of the selection and appointment process of the NHRCK. The NHRCK has received continuous recommendations from civil society and GANHRI-SCA in amending its founding law on the selection and appointment process, specifically in creating a single selection committee. Currently, the Act states that the President shall appoint Commissioners nominated by the President, National Assembly, and the Supreme Court. However, no rules or laws provide a single consistent formalized selection process used by the three institutions. While the previous Government attempted to make such a selection committee, many details needed to be ironed out, and the discussions eventually dragged on. Unfortunately, the discussion has fizzled out with the incumbent Government.

The speakers’ remarks also revealed the lack of engagement with broader civil society. In 2018, there was a positive development where the President’s office engaged civil society organizations in providing the nomination of commissioners. Eventually, this led to the first female and non-lawyer chairperson for NHRCK. Unfortunately, such engagements have regressed, and civil society organizations are no longer involved in the other appointments of commissioners. Hence, there is a strong call made by civil society to not only meaningfully participate in the selection process but also ensure that these groups are diverse and promote human rights under international standards.

The issue of independence also arises in the discussion. Based on a survey regarding the public’s perception of NHRCK, the majority sees NHRCK as a body that is not adequately independent from the Government. This means that NHRCK has been affected by the changes in the Government’s political climate, shown in the selection and appointment process. Speakers believe that the current selection and appointment process involving highly political bodies within the Government does not ensure the Commission in having Commissioners who would be able to ensure human rights in the Country and exercise independent thinking and leadership.

At the end of the session, participants and speakers mentioned that the human rights situation in South Korea is regressing, and civil society is expecting that it will continue to relapse in the upcoming years. Despite such views, speakers have reminded the resilience and persistence of civil society in South Korea in advocating for human rights and its independent Commissions such as NHRCK. One speaker spoke of the time in 2000 when civil society camped outside NHRCK and conducted a hunger strike protesting against having NHRCK be under the Ministry of Justice and in 2008 when civil society camped out again protesting against the appointment of the Chairperson.

The NHRCK has been considered a model national human rights institution in Asia and a country respected for its democratic transformation and economic prosperity. Despite the challenges in strengthening the NHRCK, all speakers and participants see there is a need, more than ever, for the NHRCK to be able to independently and effectively implement it with the hope that it would contribute to improving the human rights situation in South Korea. 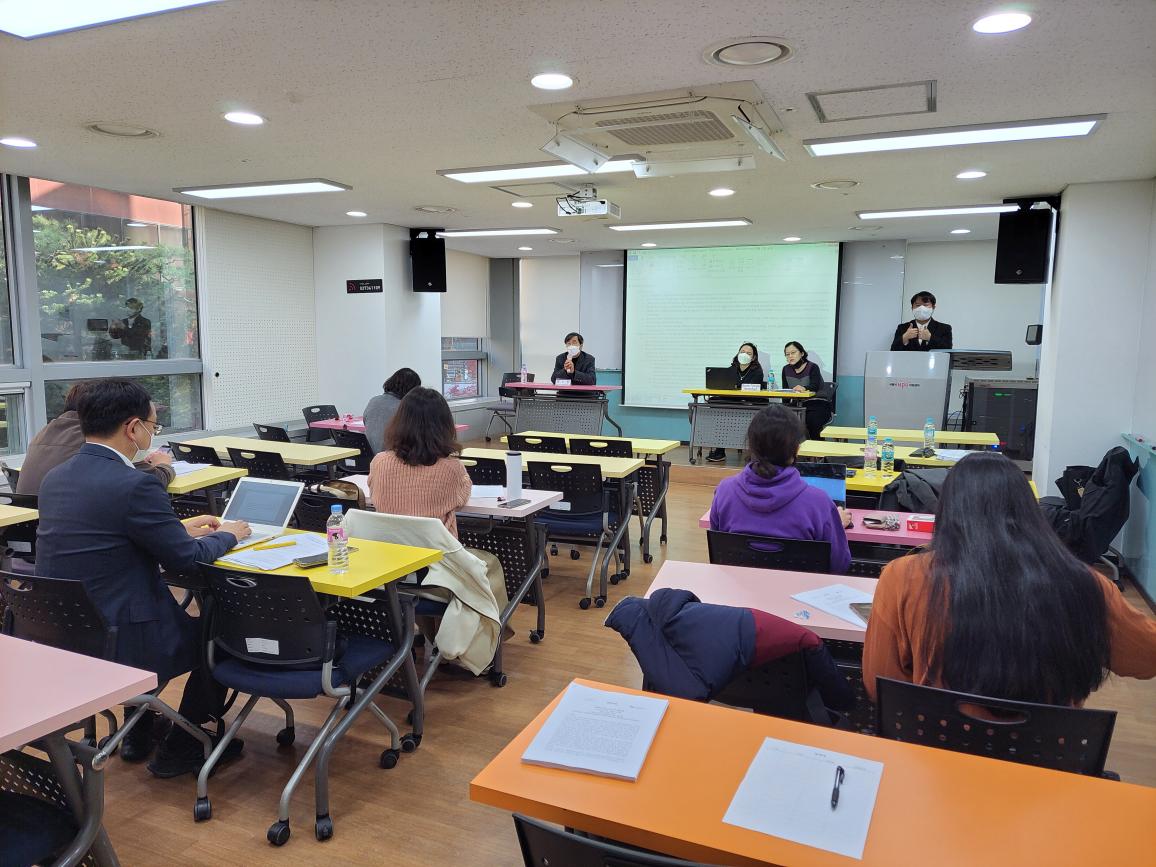