Report on the ACWC+10: Assessing the Commission’s Impact on Protecting Women and Children’s Rights in ASEAN
8 October 2020 11:08 am 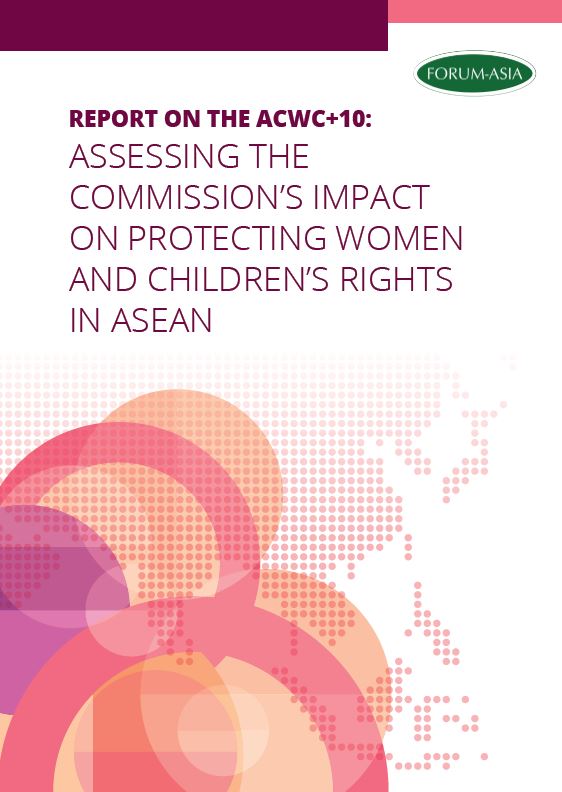 As part of its advocacy on the Association of Southeast Asian Nations (ASEAN) human rights mechanisms, the Asian Forum for Human Rights and Development (FORUM-ASIA) and the Solidarity for ASEAN People’s Advocacy (SAPA) produce an annual assessment of the performance of the ASEAN human rights mechanisms: the ASEAN Intergovernmental Commission on Human Rights (AICHR), and the ASEAN Commission on the Promotion and Protection of the Rights of Women and Children (ACWC).

From 2010 to 2019, FORUM-ASIA and SAPA have produced eight annual assessments and one ten-year assessment of the performance of the ASEAN human rights mechanisms, with key recommendations to strengthen the institution. This year marks the tenth anniversary of the creation of the ACWC as well as the fifth anniversary of the Regional Plans of Action (RPAs) on the Elimination of Violence Against Women (EVAW) and the Elimination of Violence Against Children (EVAC). We are therefore presenting a review of the ACWC, assessing its mandate and function in promoting, protecting and advocating for the rights of women and children in the region and making recommendations for the future.

This report is based on interviews, a survey, and content analysis of the impact of ACWC between its establishment from 2010 to 2020. It describes and assesses the ACWC’s creation, evolution, milestones, key activities and challenges, including how the AICHR has implemented its work, and its engagement with Civil Society Organisations (CSOs) and other stakeholders. The ACWC’s performance will be assessed in light of relevant international treaties and human rights standards, not least the Convention on the Elimination of All Forms of Discrimination against Women (CEDAW) and the Convention on the Rights of the Child (CRC) – all ASEAN Member States have ratified these treaties, and both are explicitly mentioned in the ACWC’s Terms of Reference.

This report also offers a set of recommendations to the ACWC, to ASEAN Member States, Foreign Ministers, and to relevant stakeholders to enhance the ACWC effectiveness in strengthening and implementing its mandate. It also provides practical recommendations for the ACWC to advance its ownership and independence in creatively utilising their current protection mandate to address the grave human rights situation in ASEAN region.

This review is based on primary and secondary sources, including official information from the ACWC, the ASEAN Secretariat, and ASEAN Member States; publicly accessible reports; and interviews with key individuals and organisations including United Nations (UN) experts, members of CSOs, activists, former and current ACWC representatives, and academics. The first draft of this report was shared with key respondents for further input. At the same time, this review was not designed as an exhaustive audit of the ASEAN human rights mechanism, but rather as a qualitative assessment from the viewpoint of civil society to contribute to the accountability and effectiveness of the ACWC in its service of human rights.